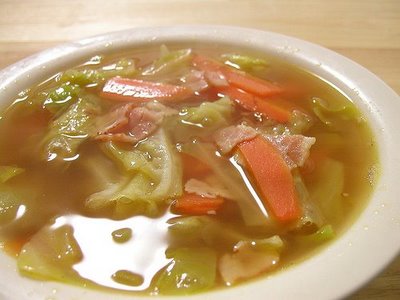 The Cabbage Soup Diet (also called the TJ Miracle Soup Diet, Military Cabbage Soup, the Russian Peasant Diet, and the Sacred Heart Diet) is an extreme cleansing diet that has followers consume a low-calorie soup and follow a rigid low-calorie diet for seven days. It promises to make users lose weight from 10 to 14 pounds in that seven day period. It is meant to be a short-term weight loss solution. It became popular in the 1980s, and has stuck around to present time, with fluctuating popularity.

Recipes for the soup vary, but typically include cabbage, green peppers, tomatoes, mushrooms, celery, carrots, a variety of spices, and sometimes bouillon and/or onion soup mix and canned vegetable cocktail.

The diet, as mentioned, involves eating as much of the cabbage soup as you like, plus certain food groups on certain days. Here’s an outline of what you can eat:

On any of these days, aside from fruit days (when you can drink unsweetened fruit juice), the only beverage you are permitted is water.

Want to discover a healthier soup! At TimetoCleanse we recommend the very tasty, nutritious and filling IsaLean Soups. The ingredients in the cabbage soup just don’t compare to the high-quality nutrition available in each convienient packet or IsaLean Soup – take a look and see the difference for yourself!

Why People Use The Diet

Of course, people try the diet because it promises a quick fix. The 10 to 14 pound weight loss in one week is a big draw, particularly to people who realize that it’s not likely or safe to lose that much fat in one week. Weight loss due to the Cabbage Soup Diet is more likely to be from shed water weight, which occurs when a person drastically cuts carbohydrate intake. Even though you are permitted fruits and vegetables on certain days, your carb intake during diet is probably less than a third of what you normally consume. The amount of actual fat lost during those seven days is much less than 10 pounds as claimed by the diet’s supporters. Other weight loss can be attributed to lean tissue loss.

Dangers Of The Diet

The Cabbage Soup Diet, like most other fad diets, has many negative aspects. First of all, any weight you lose will come back fairly quickly as soon as you resume normal eating habits. Listed below are some other potentially dangerous or otherwise negative issues associated with following the Cabbage Soup Diet.

If you make the soup using canned vegetable juice, bouillon and/or onion soup mix, it’s very likely that the soup contains high levels of sodium. This can be unsafe for people with high blood pressure or kidney problems.

Because the soup is extremely low in calories, and the rest of your day’s food allowance is also low-calorie, it’s very likely that you will suffer from fatigue, weakness, and even dizziness as the week goes on. This is due to the fact that you’re probably not getting enough energy from your food to power your activities. Another negative side effect of very low-calorie diets is that the weight you lose tends to include that of lean tissue, when your body burns muscle for energy.

Diabetics may have a hard time managing their blood glucose levels while on this diet. Anyone wishing to try the diet should first consult his or her doctor, and this is especially true for diabetics.

There’s only one day during the week when you are permitted to eat meat. That means your protein intake (unless you take a protein supplement) is dismally low. Prolonged adherence to this diet could cause problems relating to insufficient protein intake, like muscle wasting, impaired vision, and bleeding disorders. Adequate protein is required for good health.

It’s very hard to get all the nutrients you need by following this fad diet. A nutritionally balanced diet requires you eat from all food groups on a daily basis. Anyone following this diet should consider using nutritional supplements.

For anyone not used to eating such large amounts of cabbage, this diet can cause flatulence. This can be pretty inconvenient and embarrassing.

Have you Tried the Cabbage Soup Diet?

We would love to hear your experiences if you’ve tried the Cabbage Soup Diet. Leave us a short comment below and let us know what you think!