Turmeric is a deep orange-yellow spice commonly used in Indian, Thai, and Persian recipes to enhance a dish’s spicy elements. It comes from the root of a tropical shrub, and is traditionally dried and ground into a powdered spice. It has been used in cooking since 600 BC, and evolved from being used as a perfume in biblical times to a spice in Asian dishes. Turmeric is referenced as Indian saffron and turmeric root.

It is also used as a dye for clothing; particularly Indian saris. In Western cultures, turmeric is used to add a mustard-like color to baked goods, butter, canned drinks, dairy foods, ice cream, orange juice, sauces, and yogurt, to name just a few. 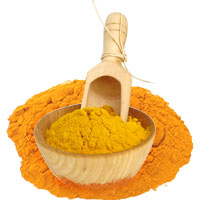 Turmeric has health properties that extend far beyond its taste component. The rhizomes of the turmeric shrub are dried and consumed in capsule form, as a tea or as a liquid extract. Taken in its raw form, turmeric fortifies bone structure as well as cartilage.

Prevalent in alternative medicine, turmeric is widely accepted as an herb that is taken to promote digestion and liver function. It is reported to increase the gallbladder’s production of bile, which can aid in digestion. One study showed that it alleviated bloating and gas for people diagnosed with indigestion.

Usage as an anti-inflammatory

In some cultures, turmeric is used as an anti-inflammatory for irritable bowel syndrome and ulcerative colitis. In Chinese and Ayurvedic medicines, it is taken to treat inflammation from arthritis, osteoarthritis, and uveitis (a painful inflammation of the iris of the eye). Its anti-inflammatory power is possibly due to a substance found in turmeric called curcumin, which is being explored through clinical trials for its anti-inflammatory and antioxidant properties. Curcumin is thought to lower levels of two enzymes called cyclooxygenase-2 [COX-2] and lipooxygenase [LOX], both of which are responsible for inflammation and pain.

Curcumin has powerful antioxidant properties, and is considered a strong fighter against free radicals that attack cells in one’s body. Furthermore, consuming turmeric can help your body reverse damage done to cell membranes, and prevent the chain reaction free radicals set off when they attack healthy cells.

As a transdermal, creams made with turmeric are used as a healing antiseptic for bruises, eczema, and scrapes on the skin. Indian women have long used it as a depilatory paste to remove unwanted hair. In alternative medicine, some mix turmeric with milk or honey and take it as a way of staving off bacterial infections.

According to the University of Maryland Medical Center’s Complementary Medicine database, taking turmeric is considered to be safe for adults and children. People with gallstones should talk with their doctor before taking turmeric. Ingesting large amounts of turmeric for an extended period of time can cause stomach upset and can exacerbate ulcers.

Click here to find out more about Isagenix Products.